In version 5.23 of Survey Solutions, the focus has principally been on improving reports by:

While improving reporting has been our priority, there are been other improvements as well:

While most reports show survey progress, the Status Duration report carefully flags lack of progress. By seeing how many days interviews stay in the same status, survey managers can see whether survey operations are moving forward, and identify any bottlenecks (e.g., slow approval by supervisors, slower reactions by HQ, etc.) .By clicking on any cell in the report, managers can drill down to the details of which questionnaires and/or field staff are behind interviews stagnating in the same status.

Troubleshooting can be hard. To make this difficult task somewhat easier, the Devices/Interviewers report compiles information on potential problems—failures to sync with the server (NEVER CONNECTED), oversights in updating Interviewer (OLD VERSION), and problems in tablet settings (WRONG TIME ON TABLET), etc.. From this report on all interviewers, survey (IT) managers can easily navigate, with a click, to more detailed reports on an individual interviewer’s sync history and tablet info.

Facility for exporting reports to XLS, CSV, and TAB formats

Even if you have moved to CAPI, your bosses or clients may still want paper reports. To make traditional reporting easier, all tables on the Reports tab can now be exported to XLSX, CSV, or TAB format. From that format, you can easily include them in status updates to internal and external clients. To export, navigate to the bottom right of the report, and click on the desired download format.

All reports have been given a modern look and feel. Column headers can be clicked to sort most reports. Rows, thanks to alternating dark and light lines, are easier to read.

Most reports have headers with totals, making management of surveys with several survey instruments easier.

Many reports have more straightforward controls. All filters have clearer names. Some filters, like those for the Quantity and Speed reports, have been organized in a more intuitive order.

Improved interface for the Interviews tab in Headquarters/Supervisor

More than a simple makeover, the improvements to the Interviews tab are more functional than aesthetic.

First, Interviews have a new action menu. Upon (left-) clicking on any interview, the Headquarters or Supervisor user will see a menu of actions available. 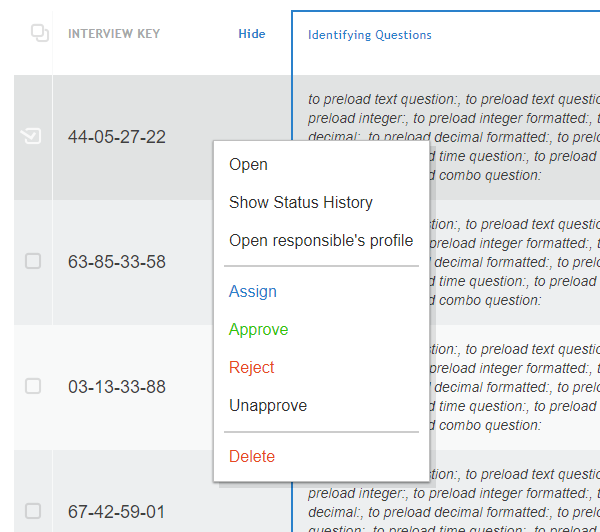 Second, some of the menu actions are new actions. The Show Status History option shows a status report for the selected interview in clear, compact format—showing what status change occurred (STATE), when it happened (CHANGED ON), who initiated the change (BY), who picked up the interview (ASSIGNED TO) , and some optional notes on why the change occurred (COMMENTS). 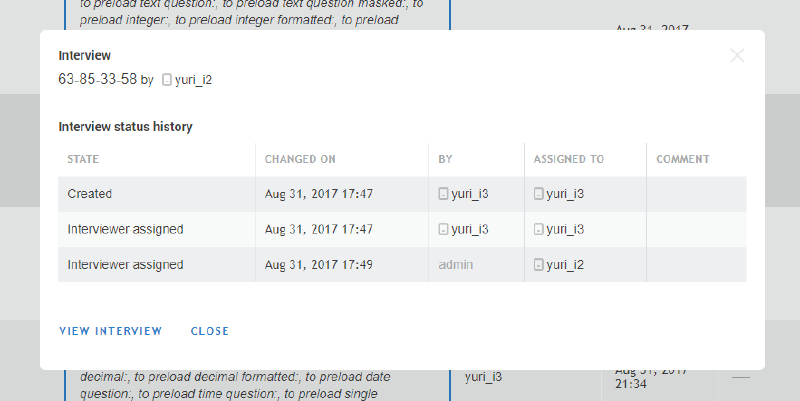