The December development sprint focused on improving the user experience in several areas:

While new features typically do not interfere with old features, sometimes there are exceptions. With this release, there are two such features:

Coming is another such feature. To make significant improvements to responsiveness of the Interviewer’s user interface, especially for large questionnaires (i.e., 800+ questions), we will be releasing an update. In mid-December, we will be releasing this as a hotfix to the current version, 5.25. To receive this hotfix, users need to write our support team. In early February, we will be releasing this code as part of the new version, 5.26. At that point, the update will be automatically sent to all servers. Whenever this update is received, users will need to update their tablets so their updated servers can talk to tablets with updated software.

To make reviewing interviews easier, the interview details view—that is, the view Headquarters and Supervisors have of the full interview—has been substantially improved in two ways. 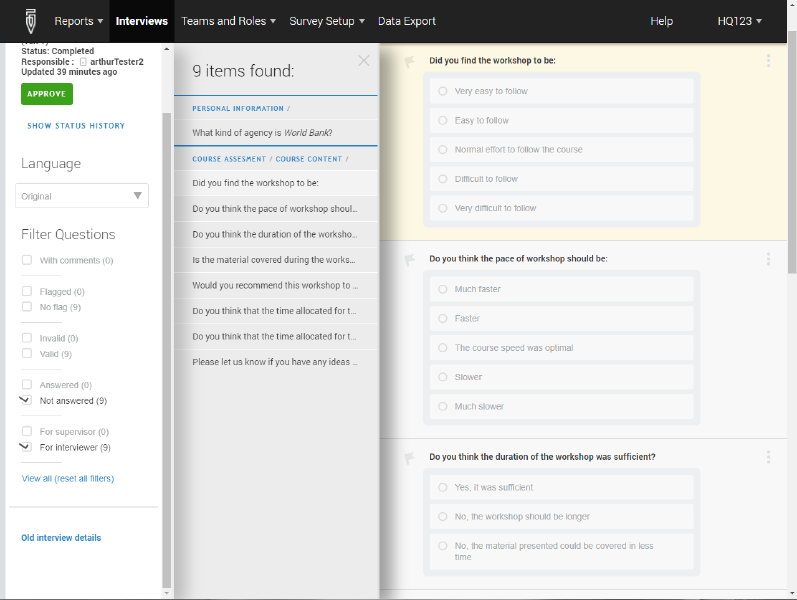 Second, the user interface has been made more powerful by the introduction of filters. In the left-most pane, Headquarters and Supervisor users may filter interviews in order to focus on content of interest by ticking on the corresponding box(es) (e.g., supervisor questions, flagged questions that are also invalid, etc.). When used, filters query the questionnaire for questions of interest, and yield a list of results in the middle pane. Clicking on a result has the effect of moving to that result and its context in the questionnaire.

Have a survey in the field right now? Inform field teams of the change, and help them make the transition from the old interface to the new one.

Not ready for the update? No problem. The old interface can still be used for the next few months. To revert to the old design, click on Old interview details at the bottom of the left-most pane.

Previously, most parts of Survey Solutions were localized to other languages. But there were a few gaps. Designer was not localized. For some previously localized software components, like Headquarters, recent development outpaced translation.

Now, every component of Survey Solutions speaks your language. With version 5.25, all text in all software components—that is, in Designer, Tester, Headquarters, Supervisor, and Interviewer—have been translated.

For the moment, the full interface has been translated for the following languages:

In future releases, there are plans to translate the interface fully into these languages as well:

Beyond localization, version 5.25 has made two more steps towards making Survey Solutions even more multi-lingual friendly: 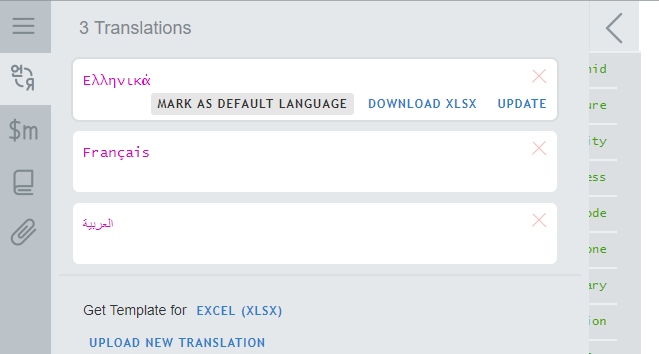 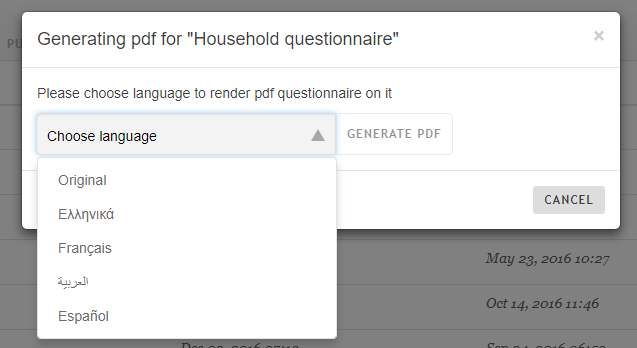 Up until now, questionnaires have been a searchable list of documents. With version 5.25, folders will be introduced for public questionnaires.

But these are simply examples. To make this content most useful, we ask our users to write us with ideas and with content to share. To do so, please write to us.

In future releases, folders may be expanded to help users with file management. In the near future, all users will have a Shared with me folder that captures all questionnaires developed by other but shared with users.

(Note: users with code that creates assignment files will need to update that code to ensure that those files contain the new variable names Survey Solutions now expects.)

Second, identifiers take on the name of object they identify. If the household member roster is called hhroster, for example, then its identifier is named hhroster__id.

Case identifiers appear in all files

To facilitate merging, the following case identifiers appears in every export file:

Previously, the status of surveys and their data have been separate entities. To see status, one needed to consult interview reports (or find a case in the interview_actions export file). To analyze data, one needed to export data.

Now, the export files contain two variables that provide a useful bridge between survey management and data analysis. In the main data export file, users will find the following variables:

The interview__status variable corresponds to the status in the survey management system (e.g., Completed, ApprovedBySupervisor, etc.). The variable has_errors captures whether the interview contains any validation errors—1 if so; 0 otherwise.

With version 5.25, we have continued implementing the following data policy: if Survey Solutions captures or displays it, Survey Solutions should also export it. That way, users can use all the rich data we capture, and conduct analyses that go beyond what the current user interface allows.

With that in mind, two new data files are now available for export:

Previously, Survey Solutions collected summary information on interviewers, and detailed data on the devices they use (e.g., Android OS version, battery power, speed of connection on last sync, etc.). The interviewer information was available on Teams and Roles > Interviewers. The detailed device and sync data could be seen on that interviewer’s profile page.

Now, Survey Solutions combines those two reports into a single, exportable one. To export that report, navigate to Teams and Roles > Interviewers, scroll to the bottom of the screen, and click the desired file format. 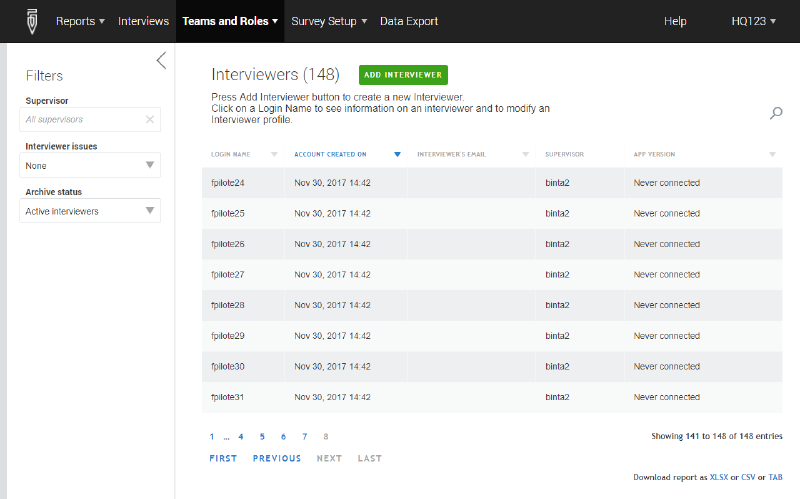 This data could aid survey manager is in identifying the most frequent validation errors, overall and/or by team. A boon for active survey management.

Earlier, Survey Solutions’ area questions required maps to be side-loaded to a particular folder on each deployed tablet. This process for map distribution, to say the least, is tedious and error prone.

Map assignments, like all other assignments made on Headquarters, are part of survey setup. 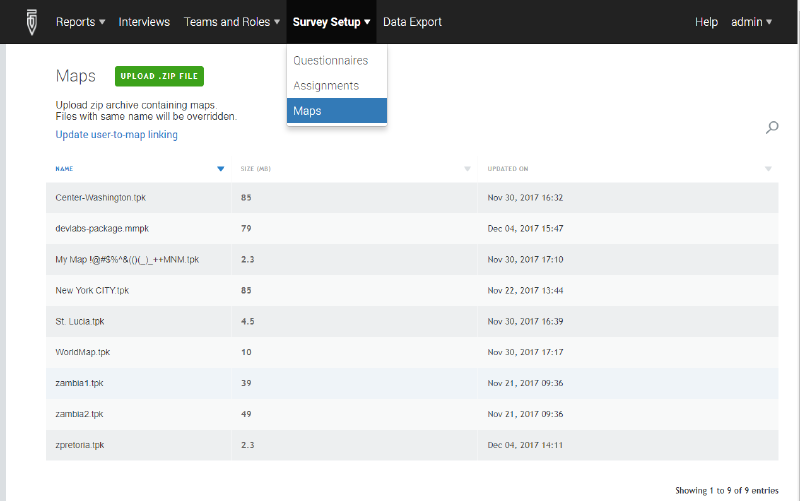 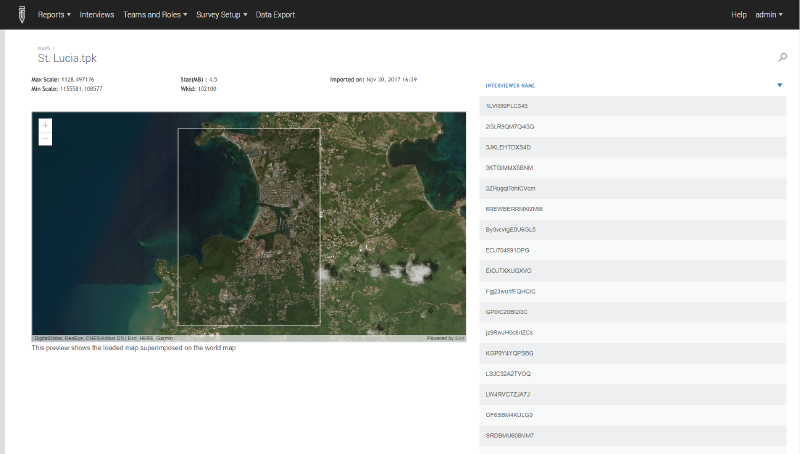 For any given map, the survey manager may preview the map on Headquarters, and see the users to whom it is assigned 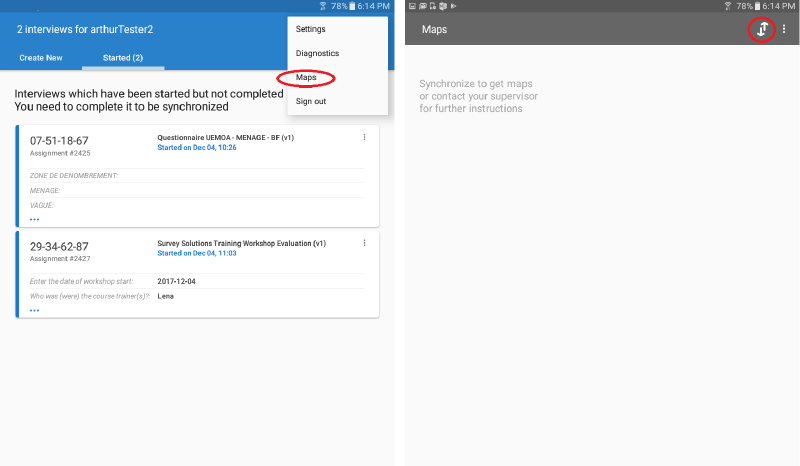 In addition to the big-ticket items above, version 5.25 contains several